The Cytosponge-TFF3 tandem for non-endoscopic screening is one of several being developed or newly available to expand screening for Barrett's or early stage adenocarcinoma at lower cost and with less invasiveness and patient inconvenience. In this report from the BEST3 Consortium, Markov modeling was used to investigate cost effectiveness and quality-adjusted life-years in a randomized clinical trial. They found an ICER of £5,500 (a relatively low amount), which might be even lower in a younger population. 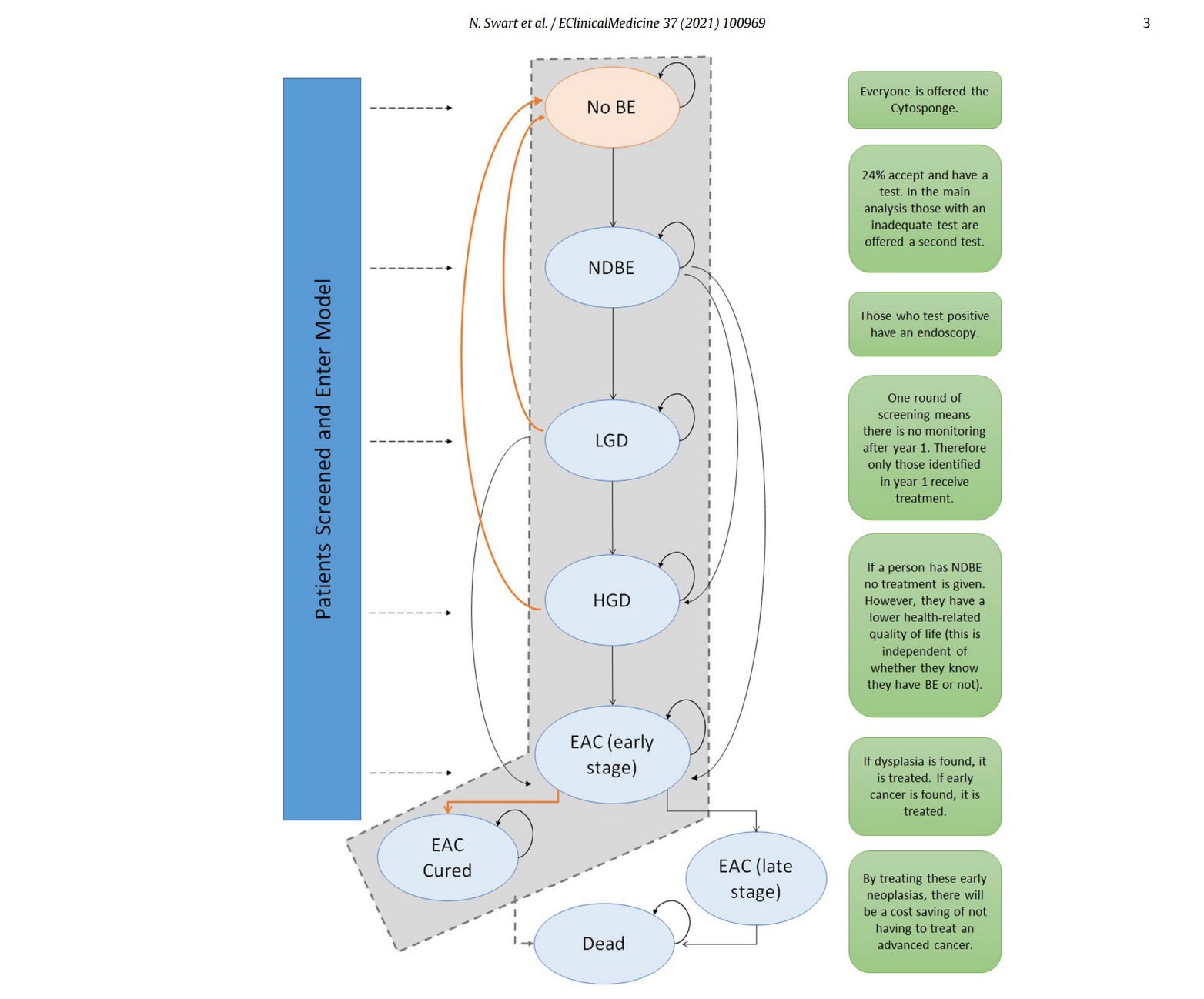 Background: Esophageal adenocarcinoma has a very poor prognosis unless detected early. The Cytosponge-trefoil factor 3 (TFF3) is a non-endoscopic test for Barrett esophagus, a precursor of esophageal adenocarcinoma. Randomised controlled trial data from the BEST3 trial has shown that an offer of Cytosponge-TFF3 in the primary care setting in England to individuals on medication for acid reflux increases detection of Barrett esophagus 10-fold over a year compared with standard care. This is an economic evaluation of Cytosponge-TFF3 screening versus usual care using data from the BEST3 trial which took place between 20th March 2017 and 21st March 2019.

Methods: A Markov model with a one-year cycle-length and a lifetime time horizon was created, adapting previous modeling work on Cytosponge screening. The impact of one round of Cytosponge screening was modelled in patients with a median age of 69 years (based on BEST3 trial population). Cost-effectiveness was expressed as an incremental cost-effectiveness ratio (ICER). Deterministic and probabilistic sensitivity analyses were conducted on model parameters.

Findings: Per person, one round of Cytosponge-TFF3 screening, including confirmatory endoscopy and treatment, in the intervention arm costed £82 more than usual care and generated an additional 0.015 quality-adjusted life-years (QALYs) at an ICER of £5,500 per QALY gained. Probabilistic sensitivity analysis gave an ICER of £5,405 (95% CI -£6,791 to £17,600). The average QALY gain per person is small because the majority of patients in the model will not develop BE and therefore will have no resulting change in their utility, however the small proportion of patients who are identified with BE dysplasia or cancer derive large benefit. At a willingness-to-pay threshold of £20,000 per QALY, the probability that Cytosponge-TFF3 was cost-effective was over 90%.